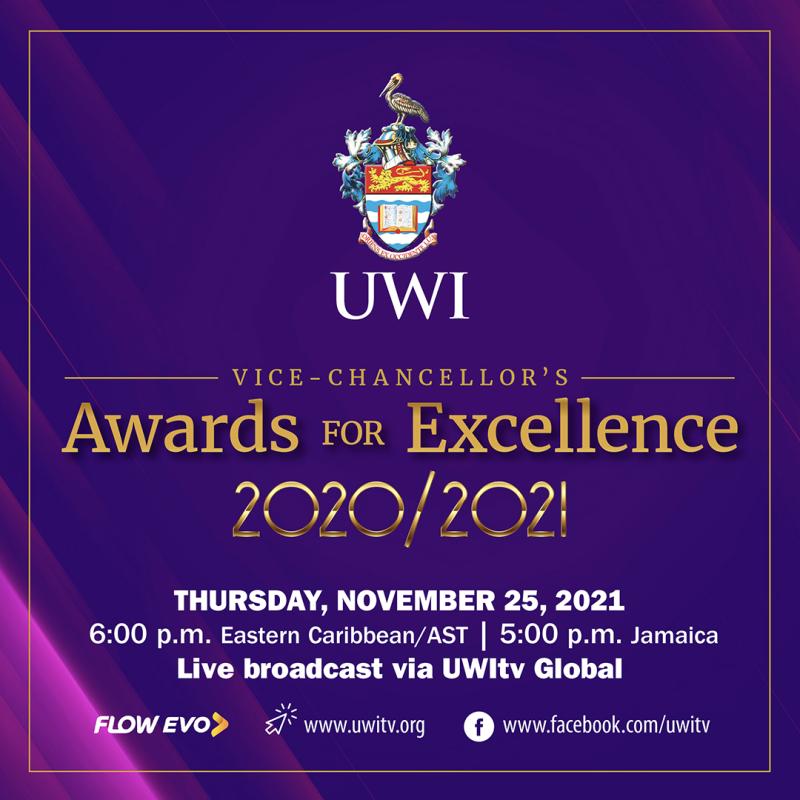 The UWI Regional Headquarters, Jamaica. Monday, 29 November 2021. — “We do not proclaim our achievements enough. Our modesty and timidity are our worst enemies”.

This declaration, made by Professor Rose-Marie Belle Antoine, came during the annual Vice-Chancellor’s Awards for Excellence hosted by The University of the West Indies (The UWI) on Thursday November 25.

In a live, virtual Awards ceremony, broadcast via UWItv, seven staff members and one department from across the UWI system were presented with the Awards which represent the regional University’s highest accolade.

Speaking in her capacity as the new Chair of the Selection Committee for the Awards and Pro Vice-Chancellor Graduate Studies and Research, Professor Rose-Marie Belle Antoine noted that from childhood, Caribbean people are taught not to boast. “Unlike other cultures” she said, “we do not repeatedly affirm what is ours and sometimes lack confidence in our worth and in our work.” She added, “Our history of subjugation and denigration exacerbate that tendency. It is difficult to believe that we are or can be the best globally but we can and this award of excellence highlights that.”

A former Vice-Chancellor’s Awardee herself, Professor Antoine spoke of several West-Indian academics and innovators who have made huge strides for the Caribbean on the international stage including current Vice-Chancellor, Professor Sir Hilary Beckles who she recognised for “blazing trails and reclaiming our dignity and reparations,” and pioneer in solar energy, the late Professor Oliver Headley.

In his address to the 2020/2021 cohort, Vice-Chancellor, Professor Sir Hilary Beckles stated, “All fine universities are distinguished for their excellence and ethical performance.” He congratulated the awardees saying, “Today we celebrate the conduct and the performance of our colleagues…You are the flag bearers of who we are. You are the standards we have set for ourselves. We thank you as we celebrate you for your excellence.”

The Vice-Chancellor’s Awards for Excellence, established in 1993 celebrates outstanding achievements by academic, senior administrative and professional staff members in the areas of teaching, research, service to the university community, contribution to public service, all-round excellence in a combination of two or more of the areas, excellence in multi-campus research and excellence in international collaboration. There is also a departmental award, and Professor Antoine announced that a new award for excellence in innovation and entrepreneurship will soon be established.

The awardees are peer-nominated and selected following a rigorous assessment process, first at the campus level, then by a university-wide selection committee for the final selection based on their work and University’s core values.

Professor Tannecia Stephenson, Head of the Department of Physics, Faculty of Science and Technology at the Mona Campus received this year’s award for Research Accomplishments, while the award for Teaching Excellence was presented to Dr Venkateswara Penugonda, Senior Lecturer in the Department of Physics in the Faculty of Science and Technology, also from the Mona Campus.

Three awards for service excellence to the University community were given to Ms. Allison Fung, Executive Assistant to the Vice-Chancellor, based at the Regional Headquarters in Jamaica, Dr Heather Ricketts, Deputy Dean in the Faculty of Social Sciences at Mona, together with Mr Compton Beecher, Chief Forensic DNA Analyst in the Faculty of Medical Sciences, also from Mona. Professor Cynthia Barrow-Giles, Professor in the Department of Government, Sociology & Social Work in the Faculty of Social Sciences at Cave Hill was awarded for her contribution to Public Service, while Professor Marshall Tulloch-Reid, Director of the Caribbean Institute for Health Research (CAIHR) at Mona was honoured for All-Round Excellence in Research and Public Service, and the Office of the Dean of the Faculty of Medical Sciences at the Mona Campus received this year’s Departmental Award. During the ceremony, the Department was represented by Professor Russell Pierre, Director, Health Professions Educations Unit, Mr. Craig Hall, Facilities Officer, as well as Professor Minerva Thame, Dean of the Faculty and Dr. Annette Crawford-Sykes, Deputy-Dean, Teaching & Learning.

Professor Tannecia Stephenson was selected to deliver the Awardees’ response. She acknowledged The UWI’s current rankings by Times Higher Education (THE) and its recognition among the top 1.5% of universities in the world. Speaking on behalf of her fellow awardees she said, “We recognise that our success, and that of our university are inextricably linked.” Professor Stephenson also thanked colleagues across the University, saying “The awards this evening would not have been possible without the amazing teams we have worked with over the years.”

Note to the Editor:

The UWI is the only Caribbean-based university to make the prestigious lists since its debut in the rankings in 2018. In addition to its leading position in the Caribbean, it is also in the top 20 for Latin America and the Caribbean and the top 100 global Golden Age universities (between 50 and 80 years old). The UWI is also featured among the leading universities on THE’s Impact Rankings for its response to the world’s biggest concerns, outlined in the 17 United Nations Sustainable Development Goals (SDGs), including Good Health and Wellbeing; Gender Equality and Climate Action.