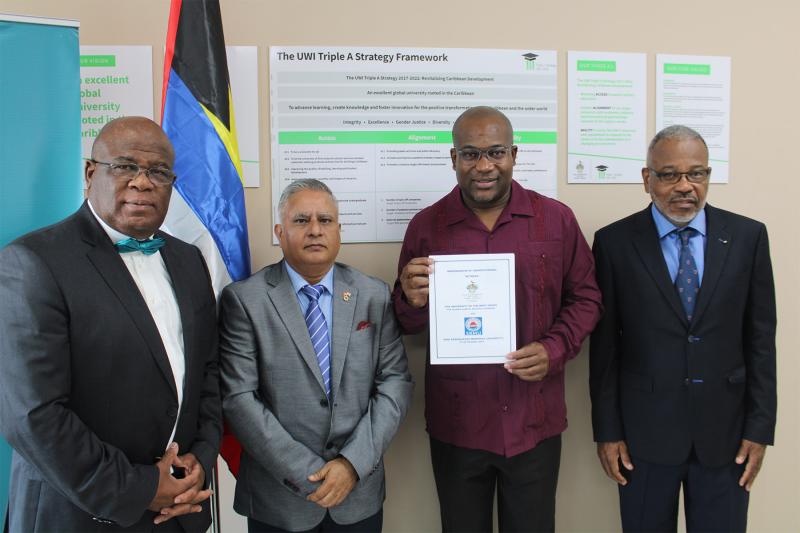 St. John’s, Antigua & Barbuda, November 22, 2022 – On Monday, November 21, 2022, The University of the West Indies Five Islands Campus (UWI FIC) signed a landmark Memorandum of Understanding (MoU) with the Shri Ramswaroop Memorial University, India (SRMU). The MoU was signed during a virtual signing ceremony, which was attended by officials from both universities and members of the diplomatic corps.

The MOU will see the institutions collaborate on programmes in new and emerging areas at the undergraduate, postgraduate, and doctoral levels, as well as faculty and student exchanges. Also, both institutions will be carrying out joint research projects in areas of local and global interest, along with organising joint international conferences, seminars, workshops, and webinars.

Speaking at Monday’s signing ceremony, Principal of The UWI Five Islands Campus, Professor Densil Williams, noted that a partnership like this benefits both institutions. "We bring to the table significant value as our partners in India as well, and that is why I am very confident that a university partnership like this is only going to do well for our institutions." He stated that collaborations like these will be critical for the advancement of young institutions like the Five Islands Campus and SRMU which are on the path to finding practical and relevant solutions to global problems.

Vice-Chancellor of the Shri Ramswaroop Memorial University, India (SRMU), Professor Devendra Kumar Sharma stated that SRMU is excited to collaborate with The UWI on areas of mutual interest such as information technology, management, and education. “We look forward to exploring the areas that are of benefit through our collaborative activities, research collaborations, joint degree programmes designing teaching materials, and other scientific and technological literature.”

The collaboration was initiated by the High Commissioner of India to Antigua and Barbuda, His Excellency Dr. K.J. Srinivasa, following his visit to the campus in 2021. In his remarks to the virtual ceremony, Dr. Srinivasa expressed his satisfaction with the fruit borne from deliberations through The UWI and SRMU. "We believe that international collaboration in science and technology is crucial when it comes to addressing pressing global challenges, and this is a great example." Dr. Srinivasa thanked the honorary consul to Antigua and Barbuda, Mr. Vijay Tewani, as well as the staff of the High Commission for their work on the proposal to bring the two institutions together.

This agreement with SRMU is one of several MoUs signed by The UWI Five Islands Campus with international institutions, including agreements with Harvard Business School and the University of Maryland, Baltimore County.

The UWI is the only Caribbean-based university to make the prestigious lists since its debut in the rankings in 2018. In addition to its leading position in the Caribbean, it is also in the top 25 for Latin America and the Caribbean and the top 100 global Golden Age universities (between 50 and 80 years old). The UWI is also featured among the leading universities on THE’s Impact Rankings for its response to the world’s biggest concerns, outlined in the 17 United Nations Sustainable Development Goals (SDGs), including Good Health and Wellbeing; Gender Equality and Climate Action.