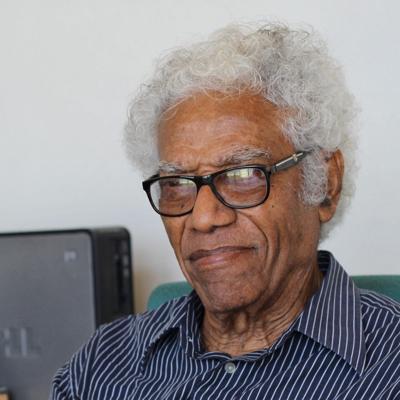 The UWI Regional Headquarters, Jamaica W.I. Monday, June 6, 2022—The following statement is issued by Professor Sir Hilary Beckles, Vice-Chancellor of The University of the West Indies, on the passing of Professor George Lamming, Caribbean and global literary luminary.

“Professor George Lamming, Caribbean and global literary luminary, Philosopher King of Postcolonialism, and social justice activist, transitioned in his native Barbados—the castle of his skin—on Saturday June 4, 2022 at age 94. The news punctured the peace of mind of the academic community at The UWI, where he was Professor in Residence at the Cave Hill Campus. It was there in his office at the George Lamming Pedagogical Centre, that we last met and occupied ourselves for a few hours with one of Miles Davis’ last statements: that time is never enough to exhaust the ever giving, producing, creative imagination of the dedicated intellect.

George was a phenomenal philosopher who erupted in the literary world early in life with the publication in 1953 of a classic novel of anti-colonial consciousness—In The Castle Of My Skin—written during his 23rd year of life. From his Bridgetown Village, he traversed the intellectual universe and provided it with a pedagogy of liberation that underpinned Pan-Africanism, socialism, and a 20th century humanism that included feminism, dialectical materialism, and the Caribbean cultural revolution. His embrace of Cuban socialism became a template for his support of Maurice Bishop and Walter Rodney in their quests to detach the neo-colonial region from the scaffold of rejected imperialism.

As a craftsman of literary forms, his citizenship within The UWI community was celebrated as an expression of Caribbean civilization at its finest. He was a brother within the hood, and a comrade in the intellectual struggle to win our freedom with dignity and self-determination. A fierce but gentle and subtle debater and conversationalist, our hero was all too human in his love of humour and the culture of laughter.  Always with a twinkle in his eyes, he communicated a deep compassion for sincere friendship and solidarity with those in the struggle.

His special love of The University of the West Indies for its mandate and role as a regional freedom vehicle, drove him to offer constant critical insights into its contradictory omens and at times its torn and tortured realities and identities. He was in this sense the quintessential Caribbean progressive intellectual who transcended theory and grounded his existential engagements within the masses at the grassroots. He was a soldier of the Caribbean soul, forever building solidarities wherever liberation circumstances were erupting.

Within this context, our crusading citizen would expect of us to soldier on in his physical absence without fear or doubt about the future. For decades he illuminated the progressive paths with his papers and speeches. We know he will be there at the rendezvous of the Caribbean victory. His life was dedicated to no other cause. He knew no other world. Until then, I simply say, “Bye George”, from all of us at your University of the West Indies.”