The UWI Five Islands seeks wider collaboration through the Commonwealth 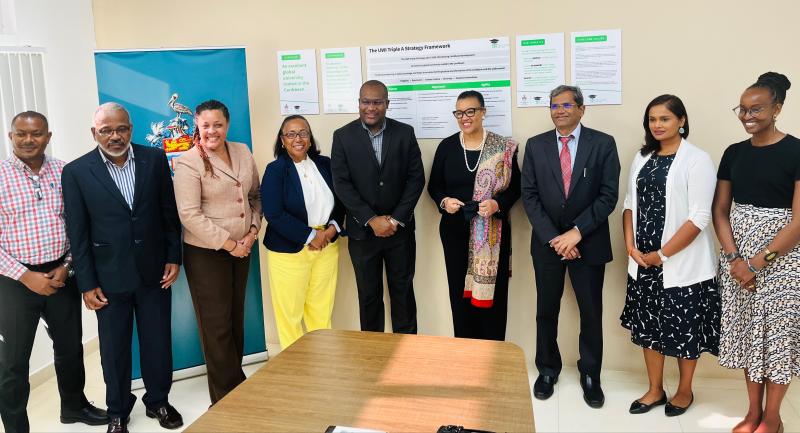 Members of The UWI Five Islands Campus and the Commonwealth Secretariat.

Baroness Scotland commended The UWI Five Islands Campus in its role expanding access to education and its collaboration in support of a Centre of Excellence for Oceanography and the Blue Economy at The Five Islands Campus.  The Secretary-General stated that the new Centre will be a game changer in the data driven world. “There is therefore a huge role for this university to play because we are heavily dependent on empirical data and yet there isn’t sufficient empirical data in this area.” She noted there were several challenges and assured the support of the Commonwealth Secretariat to the campus in areas such as data mining and artificial intelligence to address the issues affecting the Commonwealth, its member states and the world.

Pro Vice-Chancellor and Principal of The UWI Five Islands Campus, Professor Densil A. Williams commended the Commonwealth team for its visit and for the discussions on collaborating in key areas as the campus develops. The campus, which was established in 2019, is helping to innovate by bringing new technological approaches to its programmes as it prepares graduates for the labour market of the future.  Professor Williams also noted that the Commonwealth through its scholarship programme, continues to afford the expansion of knowledge and skills to young Commonwealth nationals and he looks forward to when the Five Islands Campus will have its alumni pursuing postgraduate studies as Commonwealth scholars. He also updated the Secretary-General and the team on the development of the Centre of Excellence for Oceanography and the Blue Economy.

Ranked among the top universities in the world, by the most reputable ranking agency, Times Higher Education, The UWI is the only Caribbean-based university to make the prestigious lists. In 2020, it earned ‘Triple 1st’ rankings—topping the Caribbean; and in the top in the tables for Latin America and the Caribbean, and global Golden Age universities (between 50 and 80 years old).  The UWI is also featured among the top universities on THE’s Impact Rankings for its response to the world’s biggest concerns, outlined in the 17 United Nations Sustainable Development Goals (SDGs), including Good Health and Wellbeing; Gender Equality and Climate Action.